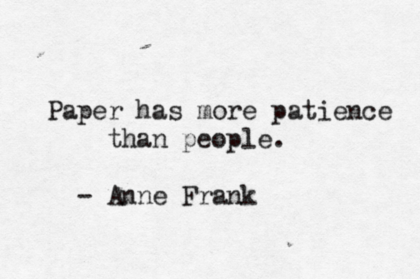 In her diary published in 1947, Annelies Marie Frank remarked; paper is patient. It doesn’t hurry, judge, or criticise. In the world of assessment, rounds of exams and corrections generate thousands of paper forms. Paper may be readily available but it introduces a range of potential errors, draining time and financial resources. Introducing efficiencies and new learning tools can seem like a means of simply taking up more time. In reality, eassessment, emarking and digital scoring technologies significantly increase reliability and validity. In Marketing, the Diffusion of Innovation was developed to illustrate how ideas and new technologies spread in societies. The two most innovative categories are the quickest to adopt a new idea, and represent only 16% of the population collectively. How do we help the remaining 84% to adopt new technologies in a similar time frame?

“…media give shape to the imaginative boundaries of modern communities, then the introduction of new media is a special historical occasion when patterns anchored in older media that have provided the stable currency for social exchange are re-examined, challenged, and defended.” (Carolyn Marvin)¹

Innovation is often termed ‘disruptive’ as it stops us in our paths and makes us rethink our ways of completing tasks. Uber was regarded by some as disrupting the taxi industry and threatening the safety of passengers. However, via Uber there is a record of where and when each passenger gets into a car, thereby majorly increasing the safety of passengers. Technology can disrupt and change behavioural patterns, but it also creates great efficiencies and gives us back time to spend on other tasks.

User acceptance of technology is an ongoing field of study in many professions as academics attempt to explain and predict the use of an information system. The original framework is the Technology Acceptance Model (TAM), created by Fred Davis in 1985. This model suggests system use is a response that can be explained by user motivation. TAM highlights the importance of user attitude in accepting or rejecting the technology. User attitude is influenced by perceived ease of use and perceived usefulness. Psychometric scales can be used to determine these perceptions, the results of which are used to predict the user’s reaction to the technology.

As suggested by the theory, it’s how we react to technology and ultimately use it which causes issues in working with new systems. Email, when first introduced, was sometimes seen as a threat which could potentially expose organisations, and in some cases, reserved for top level management. Managing reactions to technology and negotiating cultural shifts is proven to have a direct effect on the success or failure of the technology implementation. Selecting potential early adopters of the system and training them as ‘champions of change’ can help others to overcome attitudes to technological change². This encourages all employees to take responsibility for their actions, and reactions to technology.

Technology acceptance is a work in progress; share your tips in the comments below.

The Use of Technology in Clinical Skills Assessment

An essential read for those introducing technology into clinical skills assessment.